September 19, 2017 was a Tuesday.  It was the day my sister came back.  We were supposed to go to court, and she was going to give me voluntary custody of her son until she could get her house in order.  She had already signed all the papers.  All she had to do was say the word before the judge.  We went before the judge, and she told her lawyer she was taking my son home, without warning.  He had been living with us for almost a year.  She did not have either of her other two children living with her.  Her house was not in order, but she took my son..her son…our son…

October 31, 2017 was a Tuesday.  Someone stole my car from my driveway.  I woke up the next morning to go to work, and my car was not there.  We found out later that it had potentially been involved in an armed robbery, and they found it because the man driving it was waving a gun in the air in a neighborhood.  When the police arrived on the scene, the witnesses pointed to my car and said it was the car the guy with the gun was driving…

December 19, 2017 was a Tuesday.  My sister’s memorial service was Sunday, and when I returned to work after taking Monday off, there was a package in my box.  As I opened the bag, and took out the shirt, it took everything I had left not to burst into tears.  There it was in plain English – “giant slayer.”  I almost dropped the shirt on the desk.  Only two people knew about that conversation with my other sister – my other sister, of course, and my husband.  We whispered the conversation in the bathroom.  We talked about the video I watched; how the Israelites missed out on the promised land because they were afraid of the giants; how God was about to use two non-street-savvy (?) girls to overcome insurmountable odds because every report coming back to us was telling us that we were up against giants.  Yet, before we knew we were up against giants, He already told us He would be making good on His promises.  He sent a messenger to tell us…to tell me, “I [keep] the giants under contract because they work for ME…Sometimes I drive the giants out.  Sometimes, I let them stay, and I give them a job.  Sometimes I use the devil to deliver my mail.  Sometimes I take what people meant for evil and I use it for good because I’m God like that, and I got your back, and I’m already there…I’m bringing you into a place that I prepared.” (Source)

But there are some giants.  There is a whole world that you have never experienced.  There are criminals.  There are killers….Do not let them deter you from my promises.  I kill giants for fun.  I used David to kill Goliath with one stone to the forehead.  I am not afraid of giants.  I slay giants, and just in case you thought that I was not in the midst of that conversation with your sister whispered in the bathroom, I sent a lady who knew nothing of it to buy you a t-shirt and deliver it on TUESDAY….GIANT SLAYER.

Today is Tuesday – December 26, 2017.  We arrived home, and within five minutes, I heard a loud noise outside.  I look out the window, and someone is driving off with my car (before I could get it re-keyed but just after the repairs had been finalized).  The loud noise was them not knowing to exit the curb at an angle so the back of the car slammed against the pavement.  I called 911.  My co-worker happened to be outside to witness the entire episode completely by accident.  She called 911.  My husband was furious.  I could only watch as a thief drove off in my car.  I uttered a prayer that the car return safely because I had no explanation for the insurance.  I knew our rates would sky rocket.  I did not have another $500 to pay for a deductible.  My husband grabbed his keys and was out the door.  I asked him what exactly he planned to do if and when he caught the thieves but there was no reasoning with him so I said a second prayer for his safe return home.  While I was talking to the cops in my front yard, my husband called.  He found my vehicle and was in pursuit, giving me a play by play of their location.  He could not keep up, but just as he was about to lose them, the cops found him and the thieves and took over….And my car is currently sitting in my driveway, without a scratch.  And my husband is playing Monopoly with my son.

On Tuesday nights, I have classes at church.

Tuesday is the third day of the week.

Needless to say, I am AT CAPACITY.   My head is a constant state of pounding.  Everything bothers me.

But Christmas was fun.

How?  How do I continue to harness holiday cheer when my life is more interesting than anything I can watch on television?

I remember that God was born so that we can defeat giants.  He sent angels with my husband to track down thieves, and cops to take over once he found them.  Jesus was born to give extraordinary tasks to ordinary people.  Christmas is the celebration of the birth of the Man whose life breeds gloom and doom for giants everywhere.

To be sure that I know that I am a part of His master plan, He makes sure that all of my life-altering, tv-worthy events take place on a Tuesday…the day I have classes at church…the day He hand delivered a message to ensure that I understood my mission…because all blessed things come on the third day…

Need a little spirit for your holiday season?

Jesus was born so that you and I can slay giants. 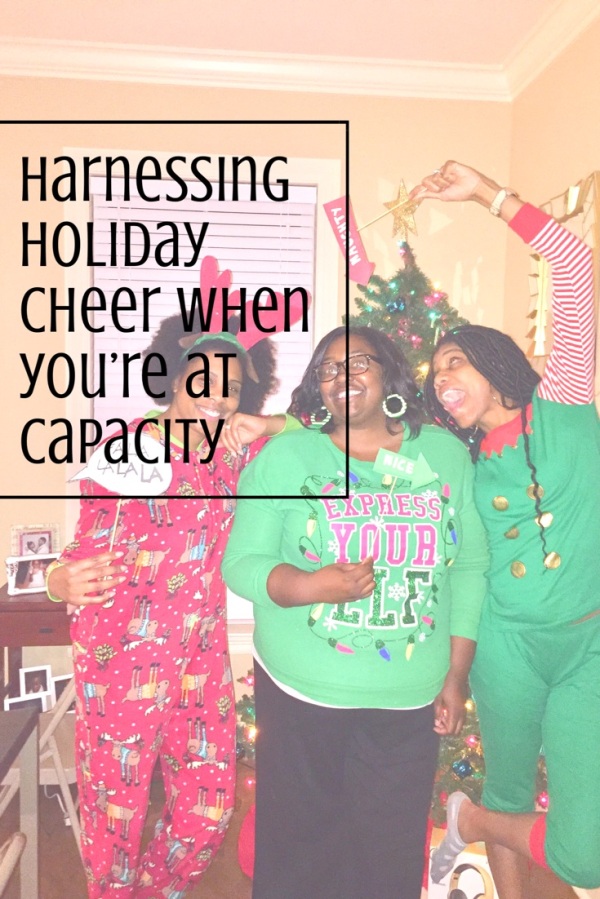 What do you do to harness holiday cheer?

Leave your email below so that I can send holiday stories straight to your inbox:

27 thoughts on “Harnessing Holiday Cheer When You’re at Capacity”