It started with one hour.  I just decided one day. I made up my mind that my kids would get one hour a day – uninterrupted.  My husband wanted the kids to play outside for an hour, and he does not get home until after the street lights come on.  Therefore, the hour outside was up to me.  The fall weather change made the transition so simple. We stayed out until we could hardly see the football sailing through the air before we confirmed that nightfall cut our evening short.  Sometimes our hour was done.  Other times, we finished with play time upstairs.

As I glanced around while they played, I noticed the layers of dirt that had accumulated on the walls and doors.  I made a mental note of the clothes strewn on floors and furniture in any given room along with the toys in almost every corner of every space both upstairs and downstairs.  Not one single room was warm nor inviting.  I could ignore it all when my face was buried in the phone creating perfectly curated photographs and engaging with the perfectly curated photos of others.  Yet, here I was face to face with my reality. 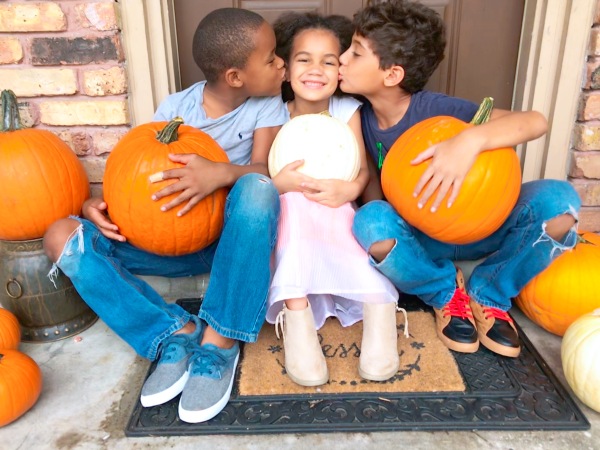 I began to look forward to that phone free hour.  I looked forward to the freedom.  I began to learn the names of my son’s tank engines that he does not talk about with his classmates at school.  They only know his obsession with Mario.  They do not know he still treasures the “Thomas” sections at Wal-Mart and Target.  I learned that my daughter can read one book after another after another.  I learned that my other son preferred hot wheels to trains, and he was in the process of teaching his robot to clean the room.

More than a few times, I spent the hour directing the children to a clutter free room.  I showed them which toys belonged in a toy box and which were large enough to line the walls.  We cleaned up the trash.  We cleared the Thomas minis, legos, and shopkins from corners, between, and behind beds.  More than once I wasted that hour.

Yet, even in the wasted time, I found myself.  I found a girl I did not even know was lost.  I lost her trying to overcome overwhelmed.  I lost her when I went all in.  I was not wrong then.  I did what I needed to do to survive.  I am always the first to admit when some mindset that I had was completely incorrect, but I was not incorrect.  I was doing what I could to make it.

I began to pick up the pieces.  I began to reclaim my time.

I spent my time before investing myself into a virtual reality to escape my actual reality.  That was fine for then, but not for now…because of one hour, my mindset shifted. And for that, I am forever grateful.

For anyone seeking to reclaim your time, start by losing yourself for an hour.  Invest yourself into someone else – your children, your spouse, your family, your church, or your community.  Give yourself fully to someone who can never afford to repay you, and watch your life change.  Watch as you transform from the inside out.  Reclaiming your time has nothing to do with your schedule.  Reclaiming your time is not about your to-do list.  You reclaim your time the moment you begin to recognize that you want more…and you decide that today is where you will begin to find it.

What are some ways that you reclaim your time?

Leave your email below so that I can send life changing straight to your inbox:

If you liked what you read here today, feel free to share with friends and family.

17 thoughts on “Reclaiming Your Time”